Google prevented the use of this app to favor its own Google Maps app. The Italian competition regulator considered Google's policy to be in violation with article 102 of the Treaty on the Functioning of the European Union:

[Article 102] Any abuse by one or more undertakings of a dominant position within the internal market or in a substantial part of it shall be prohibited as incompatible with the internal market in so far as it may affect trade between Member States.

Such abuse may, in particular, consist in:

Last weekend, I faced a similar problem with Apple Books, or rather with its partner Draft2Digital.

Apple is a dominant leader in the content distribution business. According to numbers compiled by Benedict Evans, Apple's app store commission is now larger than total global digital music revenue: 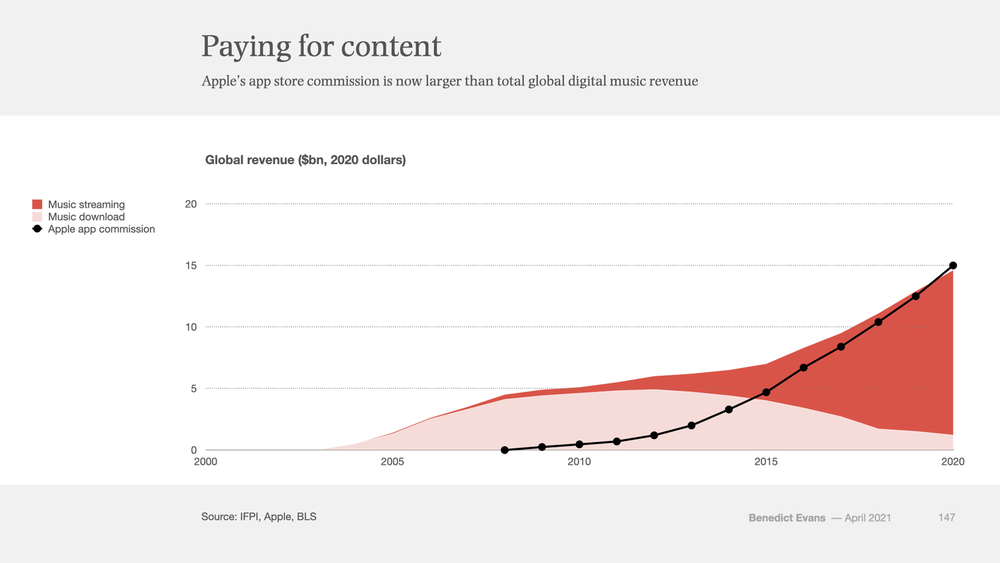 I admire Apple for having such a great business model, but I don't understand why Apple finds it necessary to abuse its position as market leader by encouraging self-censorship to its content provider.

Allow me to explain what happened to me.

Last weekend, my company, Wil-Low BV, published Entreprenerd, a book about my journey as a developer, technical founder, and entrepreneur. I released the hardcover version of the book on the Global Retail Network and the paperback version on Amazon KDP. To distribute the eBook, I used a service called Draft2Digital that propagates the eBook version on different channels, including the leading Apple Books channel.

Imagine my surprise when I received an email informing my that submission to the Apple Books channel was declined because of a "Competitor Reference - The content contains references to sales channels that are in direct competition with the chosen sales channels." 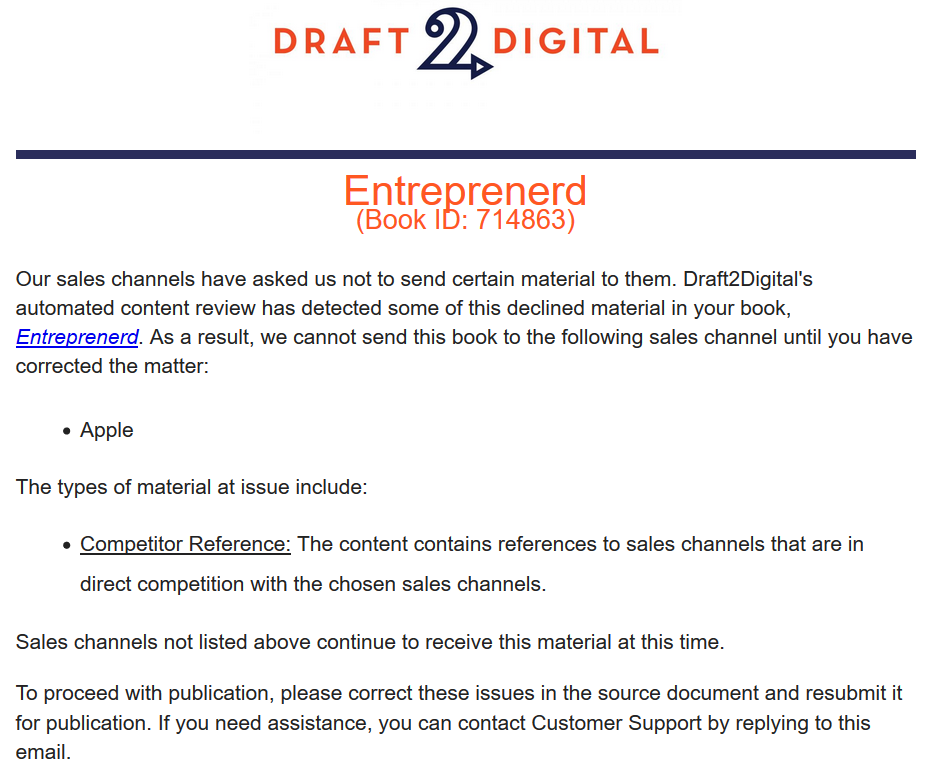 I searched the web and apparently, I am not the only author experiencing this problem. While it may be legal for a private company to use the argument "we don't accept competitor references in the books we distribute" in the US, I have a strong suspicion that it's not allowed to do so in Europe because of the aforementioned article. There's also article IV.2 of the Belgian Economic Code that explicitly forbids the exclusion / discrimination of a company on the grounds mentioned in the email sent by Draft2Digital.

Hence my question: Should I sue Apple for refusing my book?

When confronted with a problem, my first instinct is to analyze the problem. Technically, the book wasn't declined by Apple (yet). It was declined by Draft2Digital in an automated content review. As a first step, I sent support @ Draft2Digital a mail asking for more information. While waiting for an answer, I did a small experiment.

An Experiment to Confirm My Assumption

I assumed that my eBook was declined because of the following fragment: 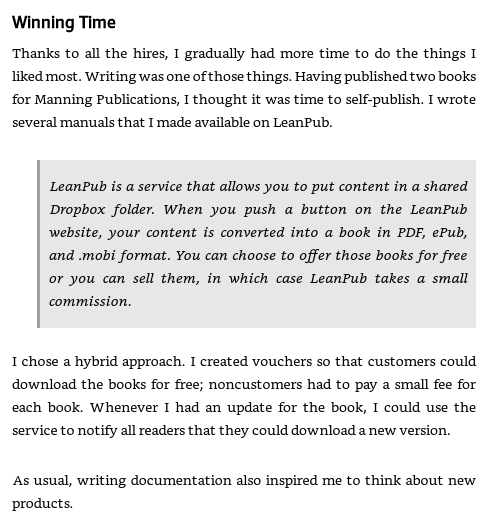 Leanpub is a lean publishing platform that I used successfully to publish and distribute technical manuals. As such, it's indeed a competitor of Apple Books.

To check my assumption, I replaced the word "Leanpub" with the words "a lean publishing platform" and I referred to Apple as "the fruit company in Cupertino." 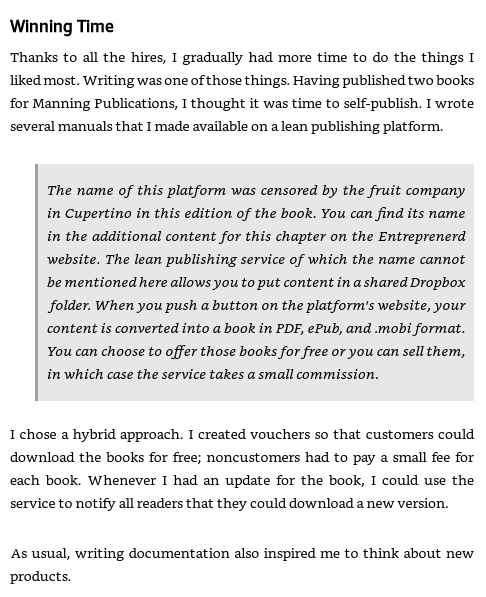 I resubmitted the eBook with these changes, and surprise, surprise: this version was accepted for publication.

A day after my successful workaround, support @ Draft2Digital sent me the following answer:

I explained what I had done to work around the problem, and I have the impression that Anthony @ Draft2Digital didn't believe me:

In this mail, Draft2Digital claims that Apple refuses book in which authors refer to Amazon. However, I have published another book on Apple Books, Gebeten, in which Amazon is mentioned twice. That book passed the test without any problem. Comparing the manuscripts of Gebeten and Entreprenerd, I was 99% sure that Leanpub was the "forbidden word." My little experiment gave me 100% certainty that my assumption was correct.

I followed Anthony's advice, and I resubmitted the original book containing the Leanpub-fragment. Again, I received the mail informing me that the eBook was declined because of a competitor reference. However, Anthony manually overruled the automated content review. As a result, the original book, including the reference to Leanpub, is now available on Apple Books.

I no longer have any ground to sue anyone. Not Apple, because it never actively declined my eBook; not Draft2Digital, because it manually fixed the problem. However, my experience reveals a concern with respect to the way some companies use automated processes to limit freedom of speech. I understand that it might be a good idea to protect people against certain language and hate speech, but should we allow automated processes to decide what is acceptable, and what isn't? Is it wise to prevent referring to a competitor? Is it necessary? I very much doubt it. Practices like this do more harm than good.

Today, I discovered that the EU published a press release Antitrust: Commission opens investigations into Apple's App Store rules exactly a year ago.

On 5 March 2020, an e-book and audiobook distributor, also filed a complaint against Apple, which competes with the complainant through its Apple Books app. This complaint raises similar concerns to those under investigation in the Spotify case but with regard to the distribution of e-books and audiobooks.

This is exactly the problem I bumped into last month. I wonder whatever was the outcome of this investigation.