The manuscript of my book "Entreprenerd" is written; the copy editing process is ongoing. Soon I'll start the production process including cover design, typesetting, and proofreading. In the meantime, more people have filled out the survey about the book.

Would you buy the book (and if so, which version)?

When asked in which form they would buy the book, half of the respondents answered that they would buy the eBook version. Initially, that percentage was much higher, but more and more people who responded in the last couple of weeks seem to prefer the paper version, and much to much surprise, 17.9% of all respondents prefer a hardcover (the Dutch version was initially only available as a hardcover).

What are the best promotion channels for the book?

When asked how the respondents learned about the survey, LinkedIn was king, followed by Twitter: 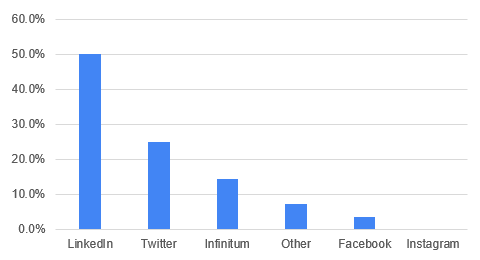 I was surprised to see that a post on Infinitum, the platform for alumni of Ghent University, resulted in some interesting leads. In the category "Other", I found responses such as "Word of mouth" and "Talked to the author". Facebook and Instagram are clearly not the right platforms for a book about business.

What does this information tell me?

It shows that I should invest in presence on LinkedIn and Twitter, but also try to find specialized platforms such as Infinitum. I'll probably create a Facebook page, but I won't make that a priority. Instagram, while an ideal channel to sell many different types of products, is clearly not the right channel for a book such as "Entreprenerd".

How much would people pay for the book?

Now let's look at the price people are willing to pay for the book, shipping costs excluded.

If we look at all the respondents, the average price people would pay is $9.2.

That's more than I had in mind, because I was going to offer the book at $7.99. Incidentally, I get the same average if I only look at the people who indicated they would buy the eBook: 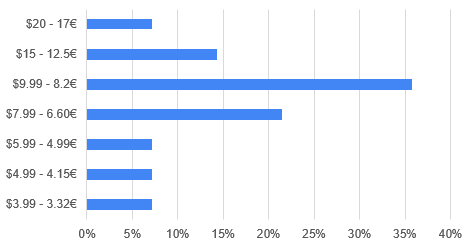 Based on these results, I'll probably raise the price by half a dollar, but I may offer the eBook at a lower price in certain markets, e.g. on amazon.in (I think the book could do extremely well in India).

The average price people would pay for the paperback version is $19.4.

If you only look at the respondents who said they would purchase the paperback, the average price they would pay is $19.8.

I was thinking of selling the paperback version for $17.99, and I think I'll stick to that price, because that's also the preferred price of 67% of the respondents who indicated they would buy the paperback version. This is good news for the 33% who would pay more, because they will get the book at a price that is lower than what they were willing to pay.

The average price people would pay for the hardcover version is $28.5.

When we filter these results, keeping only the people who would buy a hardcover version, all of them would pay $30. I think I'll stick to that price, although I may have to adjust it downward based on the commissions for the distribution channel.

How should I distribute the book?

Distribution was the biggest burden when I decided to publish the Dutch version of my story without any external help. For the English (international version), I am hiring a copy editor, a photographer, a cover designer, a typesetter, etc. I experimented with different distribution services, and although I really hate the poor service offered by Amazon, I can't ignore the existence of the distribution channel.

Look at what the survey revealed:

More than a quarter of the respondents prefers Amazon KDP for the eBook, 8.6% opt for Apple Books or Kobo. This is consistent with what I saw after I made the Dutch version of my book available as an eBook. Some people still love the Nook (Barnes & Noble). I don't know Angus & Robertson (Australia) nor Vivlio (France?) but those channels seem to be known be some of the respondents.

When we look at the paper book, you see that most people are OK buying the book from Amazon. Note that Amazon KDP doesn't offer hardcover versions, but distributes books that are printed using Blurb. 12% of the people are like me: they prefer a distributor different from Amazon, but whether Amazon will allow other vendors —and at what price— to distribute the book remains to be seen.

For those who wonder what was added under "Other", most people who filled out that field said they'd like to buy the book directly from me (preferably signed). One respondent wants to buy it on Leanpub, but I already ruled out that channel, because there are sufficient alternatives to buy the eBook. One person indicated that he prefers buying books in a retail store, but that also depends on Amazon, and on whether there are retail stores who want to buy a stock of my book. There were also requests for an Audible version, but whether I'll invest in a version that is read out loud, will depend on the success of the book.

When will the book be ready?

I'm still on schedule for end of March, start of April. I think the bottle neck will be Amazon: how fast will Amazon print and deliver the proofread versions? I have bad experiences with print-on-demand by Amazon. I may fall back on the alternative of printing with Blurb and distributing through Amazon, but I fear that Amazon won't promote such a book as it would promote a book published on KDP.