My book Entreprenerd was released exactly four months ago.

During those four months, I sold 293 copies. 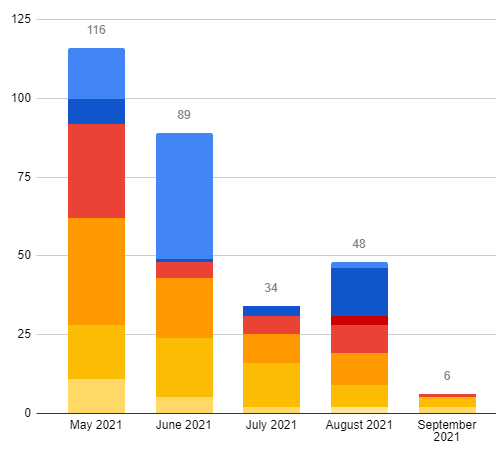 With 116 copies in half a month, the book had a great start in May, but sales dropped fast to 89 copies (less than 3 copies a day) in June, and 34 copies in July (slightly more than one copy a day). I did some extra marketing efforts in August, which resulted in 48 sales, but today we're halfway September and I only sold 6 copies so far. That's disappointing, but I'm working on some initiatives that might change the tide.

While working on the book, I was told that it might not be worth the effort to invest in a hardcover version. Looking at the distribution of the sales per version (eBook, paperback, and hardcover), I'm happy that I didn't follow that advice. More than half of the book sold are eBooks, but three out of ten sales are hardcover sales. 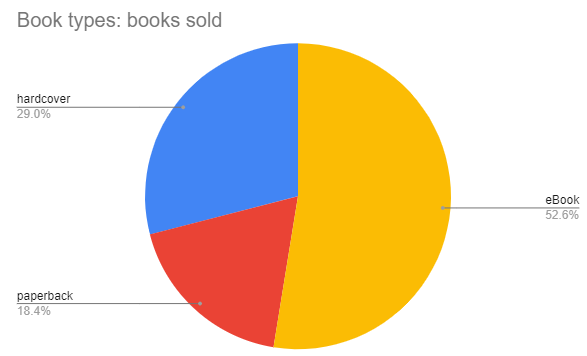 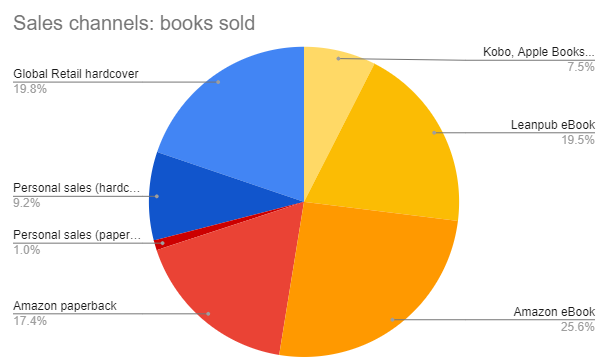 When we look at the revenue per channel, we see that personal sales are the most lucrative channel. 9.2% of all sales consists of hardcover copies that I ordered and sold personally; these sales account for 19.5% of the royalty revenue. The 43% of sales through Amazon, only account for 33.9% of the total royalties. 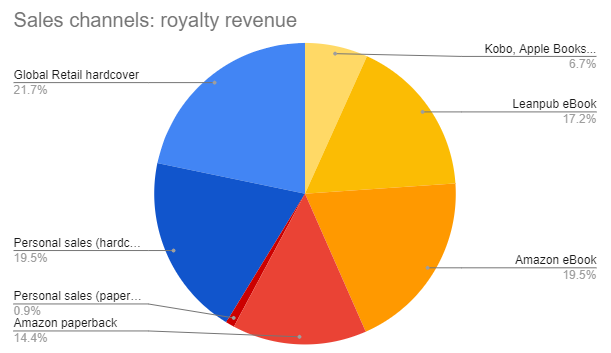 My goal was to make about 5 euro in royalties for each book sold. Looking at the chart of the average royalty per channel per month, we see once more that selling the hardcover results in the highest royalty. I made between 13 and 16 euro in royalties per book that I personally sell. I charge the same amount for everyone, but some people ordered extra copies after reading the book, and I gave those people a volume discount. (Currently, I only have 7 hardcover copies left in stock.)

When people order the hardcover version online, the price paid by the customer doesn't have any effect on the royalties paid through the Global Retail Network. So far I made between 7.07 and 7.23 euro per copy, depending on the exchange rate of the dollar and the pound. 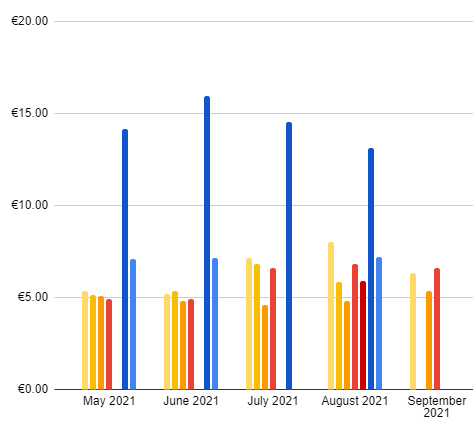 The first two months, I made about 5 euro in royalties per copy on all the other channels. I increased the price of the paperback permanently (the red bar) and the price of the eBook temporarily. Oddly enough, the price increase in July boosted the sales. When I reduced the price again in September sales dropped dramatically. Maybe the book is too cheap ;-)

Selling 293 books corresponds with 1,903.39 euro in royalties, part of which hasn't been paid out yet because I didn't reach the minimum threshold for payment yet on some channels.